When the Italian composer Giacomo Puccini presented his grand opera “Madame Butterfly” in its first performances at the “Scala Milano”, at the beginning of 1904, he was forty-six years old and found himself halfway between his first great works and the masterpieces of the last years of his life… His music had become To a large extent he was not interested in the intellectual interpretations that critics and scholars might attribute to his “Orientalist” work. In fact, Puccini was not interested in interpretations of this genre, who would not have thought that his great lyrical art had ideological dimensions. His previous works such as “Manon Lascaux”, “Bohemian” and “Tosca” were works full of the beauty of music, the magnificence of songs and the honesty of clothing and decorations, nothing more, nothing less. As for the explanations, they came later, and perhaps after the departure of this great musician in 1924, crowned with an overwhelming glory which was his share in Italy, but also in France and, of course, throughout Europe. Europe. One of the characteristics of this glory was that it was still distributed to more than half a dozen great operas which are still performed with force and success to the present day, but it is the part of Madame Butterfly that ‘it received exceptional attention where aesthetic interest combined with intellectual interest based on what happened in that aspect. that he faced Orientalism, while the West dealt with this Orientalism based on a guilt complex he felt.

Between spirituality and materialism

Admittedly, “Madame Butterfly” allows in itself a kind of great drowning in this knot of guilt, whose tragedy can be said to be explained by the spirituality of the East and the “materialism” of the West in the line of the famous saying, “East is East and West is West, and they will not meet.” No doubt “Madame Butterfly” seems, at least in part, to be an application of this saying, even if it seems miserably funny to us today. And she seemed, in any case, weeping and catastrophic, at the moment when Puccini (1858-1924) witnessed the madness of a world which was beginning to enter modernity and with it all kinds of meanness, sarcasm and a “happy nightmare”. .” From then on, one can certainly understand the failure of the first performances of “Madame Butterfly”, and it was in fact a dazzling failure. Puccini would later say that he had not known anything like him in his life, and he will not know in the last years of his life what it is like. But it was a temporary failure, for this opera soon received many alterations, so it passed from an opera in two long chapters to a work of three chapters of medium length without any modification in its music or in its songs, which “Madame Butterfly” has become, as it is now, Puccini’s opera, which is shown more than any of his other operas and is quoted profusely in various films and so on. Let us now say that what contributed to all this subsequent diffusion was precisely the historical political circumstance which pushed Japan itself to the fore. let’s not forget here that “Madame Butterfly” is almost over Also a Japanese opera, even if the “male hero” in it is an American. In any case, it is a love story of a party – Japanese – and it takes place in Japan as we know it. From then on, its atmosphere is Japanese, its decorations and its clothes are Japanese, not to mention that its heroine is Japanese, the beautiful Chiu Chiu-san, nicknamed “Butterfly”, the title of the opera, its heroine, its victim, and perhaps the representative of the oriental passion in her. In the end, the story revolves around this love that will be fatal to this Japanese beauty, especially when she finds herself forced, according to a certain geostrategic position, to abandon her child after a long wait for her American “lover” Pinkerton, the father of the child who will seem to us in the last chapter as if he knew nothing of the tragedy of this oriental woman victim of her temporary wanderings.

Here, so that things don’t look like a crossword, you have to go back to the same story. The tale, originally adapted from a short story by John Luther Long, revolves around an American naval officer, Pinkerton, who is introduced to a pretty girl by a broker in Nagasaki, Japan, as Chiu Qiu-Sun, nicknamed Butterfly. According to the traditions in force in such cases, Pinkerton holds his butterfly wedding between grandfather and banter at a time when he never ceases to touch everything in the situation of endearing humor, especially since the butterfly gives him tenderness and boundless love and lives. with him for three years, after which he had to leave and he made Dar change that her relationship with her “lover” would produce a son who would later give birth to her in his absence, and she had surrendered to him. In fact, Pinkerton had written a letter to the butterfly before that, telling her everything, declaring the reality of the situation, and that he had never intended to return or start a family, and he thanks her for everything the affection she had for him. . But the message did not reach the butterfly because its bearer, the employee of the American consulate, when he wanted to deliver it and met the butterfly, touched her with his love for his lover and his expectation, which pitied her for telling him the truth, and so he left her with a broken heart and all hope of Pinkerton’s return to reunite this little family, and she obtains all those Happiness she had promised herself. 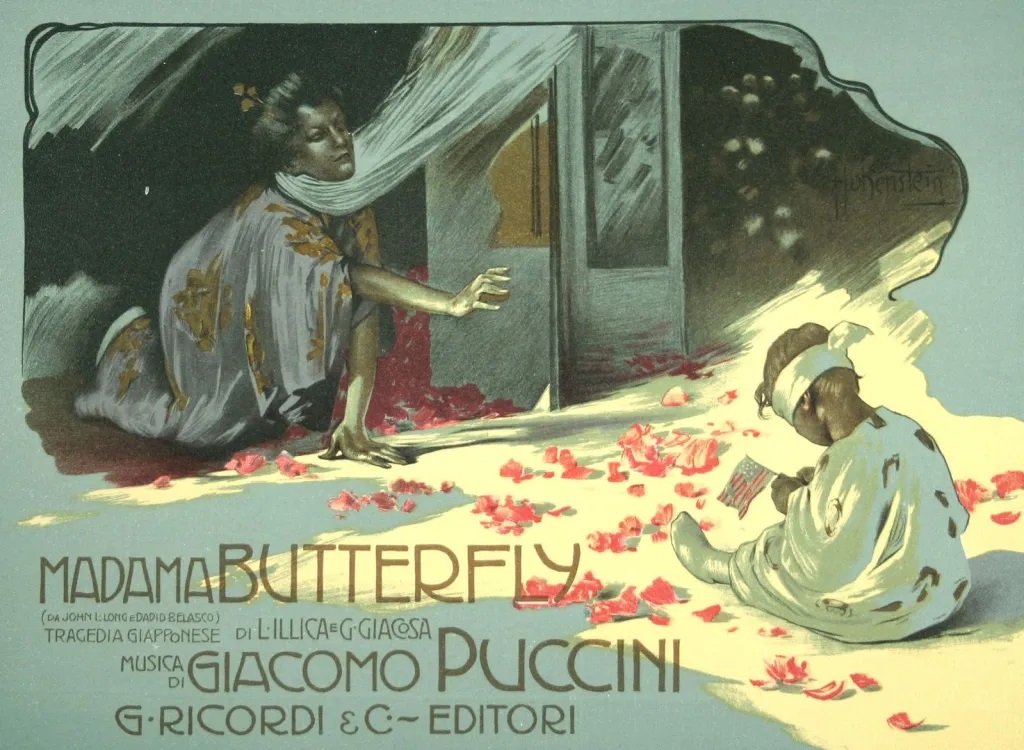 The return of the beloved

The truth is that Pinkerton will indeed return to his ship which has reached Nagasaki, but he will return with his American wife to show him this country he lived in for years as a joke and amusement, and this woman he was with married. For Pinkerton, history is always a joke to tell. But the joke stops when he learns that he has a son from this butterfly. And to wrap up the story in his simplistic American way, he won’t have to confess his paternity to the child, but rather that his wife will fall in love with the child and so he will ask Pinkerton, always between joking and serious and like a practical man who can never realize the meaning of love and emotions of this woman who will surprise him greatly to consider himself a real wife For him he will ask the butterfly to keep the child under the protection of his wife , which will surprise him take him to America and raise him as if he were his own son: his father, according to the laws and according to the balance of power, has more rights over him. And the story actually ends with the devastating despair that will befall the butterfly, as he delivers the child to his new “mother”, only to find that she has lived her whole life by being wrong. And so the final chapter ends with the butterfly killing itself and losing everything, even hope.

From the result here, Puccini has made his music for this tragic work a pinnacle in the expression of his musical talent, even if part of his use of Japanese rhythms at times when the heroine sets out to express her worries and a long wait with despair that intensifies step by step, became boring and mixed. . However, that didn’t stop “Madame Butterfly” from ultimately being one of the major operatic works in Puccini’s history, nor did it stop Chiu Qiu-sun (Butterfly) from being alongside Mimi, the central character of his opera “Bohemian” (1896) of the most humane and passionate female operatic characters seen ending in death, one victim of the fates that killed her, and the second victim of a delirious love at a time when love had become a memory of time spent eating and drinking.