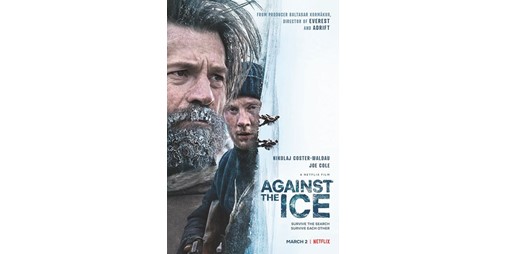 “Against the Ice” offers you a cross-sectional look, between drama and documentation, on the task of securing Denmark’s claim to Greenland, through a treatment that tells the story of two people fighting for their survival. Peter Flinth, screenplay by Nikolai Coster-Waldau and Joe Drake, based on Michaelson’s own memoir.

The film begins with an explorer returning to camp in Alabama after a failed expedition, his feet severely frozen and swollen, and his colleagues had no choice but to decide to cut off his swollen toes, and that was made by his friend. presence of the signs of the island, loyalty to his homeland and his message, but he found none of the expedition members eager to complete the search or join him, except Iver Iverson (Joe Cole), who works in the field of mechanics, he likes “Michaelson” so he decides to volunteer with him, although he does not know enough about exploring the details.

The work consists of different dramatic narratives presented by the director “Flinth” in intertwined and blended frames with great precision, although it was marred by a certain boredom due to the only filming location, where the snow is everywhere and a small wooden cabin and only two people in scenes that included 80% of the events of the film, and so you can feel bored, which we think is for the director to integrate us into the feelings of the heroes and unite with them.

Love is the greatest motivator and motivator for the characters in the work, and loyalty is what drove them to make many sacrifices, even though it seems the opposite. The first is “Michaelson” himself, who seems strict and stripped of his pity or love heart, and on the contrary, we discover with the events that he does all this and risks his life For the good of his country, which he loves so much, and for to recover his land, and in fulfillment of the memory of his friend, who found him frozen under heavy mounds of snow, so he travels thousands of miles and his life is exposed to many dangers and almost loses his life, then almost loses his head and goes mad from loneliness and loss of hope at the end of events, but love The love of his beloved, who is waiting for him in the homeland, makes him try and persevere and try to feel it, touch it and approach it in his imagination, and warm his soul with s we soul, even if it’s all a fantasy.

As for the other person who was motivated by love and affection, “Iverson”, he is a young man who fell in love with the famous explorer “Michaelson” and the stories that tell about him, and despite his lack of experience in exploration work, and his knowledge of the grave dangers that can surround him due to his adventure with “Michaelson”, but he courageously decided not to let the sad explorer down and help him to finish his job, and when they get back together and find the expedition members are gone, he doesn’t blame Mikkelsen or try to encroach on him, but rather has help and support for a period which exceeded a year at the North Pole.

The third character is Michaelson’s girlfriend, who endured years of distance and torment away from her lover, after traveling to the North Pole and her passion for her job, so I waited for him despite the possibility that he was already dead, because the mission tried to communicate with him, but they did not find anyone in the “Apalma” hut. But she was the first to wait for him when he returned to his country, with evidence of his exploration and his hit.

In one of the best story-wise dramatic lines in the entire work, the line that deals with the confused state that “Michaelson” lives in after losing hope in everything, and the mission returning, after the water freezing is complete and has turned into hard ice.

Moments of torment experienced by the hero between illusion and truth, and dozens of questions that flow into the mind and crush it… Was the decision the right one when he decided to carry out the research? Was it okay to go back to ensure the integrity of the signs he had put up the first time to prove ownership of the island? Was it fair for me to take this inexperienced young man in this business with him? And other questions surrounded him, the most important of which was his girlfriend, was it right to go away and leave her alone? The creators of the work did not let these questions flow from Michaelson’s lips, but rather created them in his mind and made us see them come out on the lips of his lover, whom he imagines, and blames him .

After the questioning phase, fantasies and illusions began to pursue him until they drove him to the brink of insanity. The director created an expressive visual image of this situation, which the explorer reached with great concentration. The director presented a number of scenes that express the state of wandering and confusion in which he lives, and the scenes that bring him closer to his beloved. In his imagination, as he hugs and kisses her, although we see him standing alone and kissing the air, a state of contradiction expressing the feeling of sadness and loss of hope to find his beloved .

Michaelson comes to a head of confusion, and fantasy meets reality, when he attacks Iverson, tries to kill him, chases him, then tries to shoot him, after Iverson jokes with him about the girl he imagines and tells him that she visited him in his sleep yesterday, and despite everything Michaelson did, Iverson, however, does not attack him and blame him for everything he did, but on the contrary relieves and helps him, because he loves her.

We think this aspect is one of the most important factors to end the viewing of the film, along with the important question: will the expedition save the explorer and his assistant or not? Because it is full of love, nostalgia and poetry, which makes it even more attractive.

The viewer may think the film has nothing to do with politics, but he is deep in its details, even if not direct, and events are moving. This mission and the many other missions that he were sent were aimed at preserving this land from American control, and we find that the hero repeats this speech more than once in Speaking, in 1909 the Danish polar explorer Ignar Michaelsen went on a mission to recover the lost maps and journals of a doomed arctic expedition to the northeast coast of Greenland, and in 1891 explorer Robert E. Perry described the east coast of Greenland and mapped a channel dividing what is thought to be an island he called “Berry Land” on the mainland, allowing America to claim it, led determined Danish sailors on a perilous journey to challenge that claim in 1907.

But in August 1909, Michaelsen’s ship became stuck in Arctic ice about 200 miles from where his ancestors were believed to have died. The men, when he and another volunteer leave to complete the search, find themselves forced to spend two winters in the Arctic, with supplies the men left for him before leaving.

After one of the expeditions failed, Michaelson, who was known for his patriotism and great love for his country, demanded to finance the expedition with Danish money. His government agreed to fund half the cost and allow the public to collect the rest. Michaelson chose a six-man crew and a huge sailing ship “Alabama” and sailed from Copenhagen on June 20, 1909.

On Ignar Michaelsen’s 90th birthday in 1970, he was nationally honored by the Danish government and he died a few months later on May 1, 1971, with a Danish patrol ship and the mountain range of Greenland bearing his name.