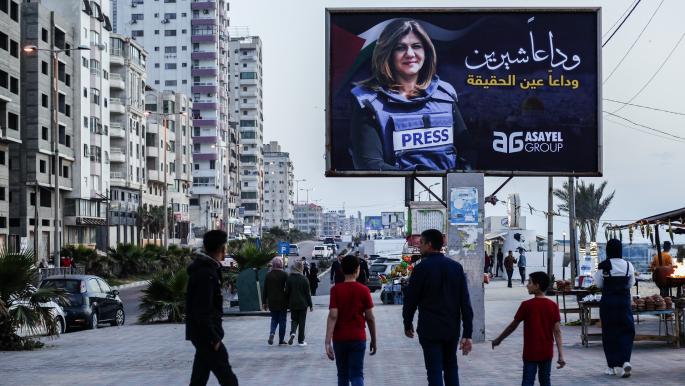 Here are Arab writers and intellectuals who have shared “The New Arab” with words from the heart, about the assassination of Jerusalem journalist Sherine Abu Aqila at the hands of Zionist occupation forces. What can words say in the face of the bullet and the military machine of colonization? And what can we tell you, Sherine?

The Syrian poet Hazem Al-Azmeh does not hide his admiration for the work of the Palestinian journalist Sherine Abu Aqleh, assassinated yesterday Wednesday by the Israeli occupation forces while covering the storming of the Jenin refugee camp. In a speech to Al-Araby Al-Jadeed, he says: “For ages I have glimpsed him there – always on the most dangerous lines of contact – all these years and I always praise his tenacity, her courage and her position, I praise her fairness, the fairness of the journalist, whose biases are not hidden, or Let’s say that she did not cover her bias with the fairness of the journalist, with the impartial tone that he was asked… Yet there was always this accuracy which sees beyond the immediate event, this accuracy which goes into its secrets, which makes it see – behind the tone of the journalist – all the ghouls gathering to violate together the Truth and the Earth.

Al-Azma adds: “Such a biography could not be tolerated by the occupiers and usurpers…Before that, they could not tolerate Rachel Corrie. Somehow, ever since I first heard of Sherine’s murder, I immediately remembered Rachel Corrie. Surely the accusation is the same no matter how far apart the nationalities and cultures are: what happened to justify Rachel’s murder was repeated in the same way as Shireen’s murder ; after careful investigations – also international – they concluded that Rachel Corrie was killed because she was mistaken by the piles of bulldozers the bulldozer removed, and that she shouldn’t have stood there. .”. He ends by commenting, “There’s always something wrong…it happened because of where someone was standing there.”

As for the Egyptian novelist Khaled Ismail, he told Al-Araby Al-Jadeed: “The assassination of Sherine Abu Akleh is the last chapter of the stage of imaginary peace, the Zionists who were able to conclude peace agreements with the puppet ruling classes, and were able to penetrate all Arab countries, and buy elites who support them and who will not be able to justify a crime. Sherine was killed, which accurately reported Zionist crimes. I don’t know what Ali Salem al-Masry said, who sold a spoiled commodity called peace with the Zionist entity and went to the capital of the entity and talked about peace and war, and maybe Ali Salem in his grave regrets betraying the Egyptian people and taking them before the Zionists. approach, they killed Egyptian children in a primary school “Bahr al-Baqar” and said that day that “it was not a school but a military barracks”, and that is a lie. With this new catastrophe, I hope intellectuals – and those in print especially, and those who rush towards the Zionist entity – wake up and know the truth about this damn creature.”

Maybe the intellectuals, and those in the printing press in particular, and the joggers, will wake up

For his part, Lebanese-Syrian artist and poet Semaan Khawam told Al-Araby Al-Jadeed that he felt helpless following the assassination of Abu Akila, which reminds him of a series of assassinations and similar events: “We feel helpless and have failed each time. time we hear similar news. We are all projects of martyrs, we are who live in this country, whether we like it or not.

Speaking to Al-Araby Al-Jadeed, Syrian novelist Khalil Al-Nuaimi said: “The assassination of Shireen Abu Aqleh signifies the brutal colonial insistence of the Zionist settlers on disregarding the Arab will, not just that of the Palestinians, and the imposition of its unilateral vision on the Arab space by force and arbitrariness. Unfortunately, the normalizing Arab regimes which are in fact an extension of the clutches of Zionism in the Arab region, helping it to impose its control today.

And he continues: “And let’s not forget that the Arab region is today the only one on the surface of the globe which still suffers from the old colonial form and all the inconveniences that go with it. As for the Arab intellectual and writer of today, he is in fact without a leading role, except in rare cases, especially after he has become more Intellectuals are like cattle in the sheepfolds of literary prizes, like you know it.”

Al-Nuaimi concludes: “Shirin’s assassination is a blow to Arab life and to the Palestinian right to freedom and stability. And I hope that the Palestinian youth will never abandon their land and their identity. Shirin, and all opponents of Zionist colonialism. Their ranks, educated and uneducated, damn it, the Arab Zionists are no less dangerous than the native Zionists.

As for the Egyptian translator and storyteller, Amira Badawi, she says in her interview with Al-Araby Al-Jadeed: “I was nine years old when oppression struck my heart, and I knew what it meant for the walls to betray you, humanity. betray you, and sniper bullets kiss you. The image of Muhammad al-Durra, and you, the one who wants to play football in the street, abstain from everything, you run the ball, you are overwhelmed with tears, and you run through the streets towards the only person who reads the newspapers in the village, asking him: what is the Palestinian cause, what is the meaning of the occupation, what drives humanity to be silent in the face of the murder of children?

She continues: “The questions grow in your head, and the voice of Shireen Abu Aqleh mingles with the voice of truth, grows with you, and Shireen grows with him, over a quarter of a century, during which the crimes of the forces of occupation and their outrageous violations of human rights standards have continued in full view of the world”.

Badawi clarified that “the martyrdom of Sherine Abu Aqleh yesterday is not a new or surprising crime for the regime which tramples journalists under the tracks of bulldozers, which intimidates neither the sanctity of death nor the earth. Nor the trees of death”. In the mercy and pleasure of God, Shireen Abu Aqila, O voice of truth.