“Free cheese is only found in mousetraps”

“They told us that Syria is the Levant, it is a holy land. And if we die fighting there, we will immediately ascend to heaven and become martyrs. We were excited then – 150 people from Kazakhstan – we share the same state of mind, we all went to Syria in 2014.”

So recalls Aseel E. (32), in an interview with the Russian section of the United Nations News, the beginning of her trip to Syria, where she, her husband and her son went to Syria in search of the “false happiness” and she was pregnant at the time.

Aseel admitted that she was obsessed not only with the idea, but also with her own goals. “We were attracted by the fact that we would not work in the Holy Land and that the money, that is to say the booty, would be distributed to us monthly. The houses and the goods of the liberated cities would be ours,” said she added. mentioned.

But, then, as if to remember: “All that attracted men above all.

Aseel comes from an ordinary family

Aseel grew up in an ordinary family in the north of Kazakhstan, where the religious influence was not as strong as in the south of the country. After graduating from university, she moved to the capital. In 2013, she converted to Islam.

She said that at first she liked the idea of ​​the hijab, as she looked good in it, then married a man with a “beard” who wore “short pants” (a reference to religious extremism) – she married a “true Muslim” and tried to become his good wife, and he convinced her to emigrate to Syria.

After “obeying her husband”, Aseel accompanied him to Syria via Belarus and Turkey. According to her, everything was fine at first. But the “Promised Paradise” was short-lived. After the outbreak of hostilities, the town they live in became besieged, and it became much more difficult without food, and the stock of food and money ran out, and Aseel recalled the unsanitary conditions in which she had to give birth to her second child in Syria.

Asel E. A Kazakh woman who returned from Syria to her home country, Kazakhstan.

Aseel lived in Syria for five years and moved with her husband from place to place. At the same time, he married two women, who bore him children.

However, one day her husband did not come home – a bomb hit the building where he worked. After becoming a widow, Aseel decided to return home with her two children. The government of Kazakhstan organizes direct flights to bring back those who wish to return. However, she and others feared that she would be imprisoned if she returned to her country, but she realized that her time in Syria meant death. And if she survives, life will be hell.

Aseel left with women from Dagestan, Turkey, even European countries, and was able to return with her two children to her country as part of the second special operation of the Kazakh authorities.

The smell of home

According to Aseel, she was lucky enough to live in al-Hol camp for only two months. And those sixty days, and five years before them full of wandering and trials, were enough to understand the hell she was living in, and not only put herself in danger, but also her two children.

There, in Syria, I realized that in a strange country, we were – and remain – foreigners

“It was there, in Syria, that I realized that in a foreign country we were – and we remain – foreigners,” she said.

Kazakh authorities have named the process of returning its citizens to the country “Guzan”, a Kazakh word meaning “bitter plant” that grows in the country, and its smell is associated with Kazakhstan.

Three years have passed since the launch of Operation Gozan – according to the National Security Committee of Kazakhstan, during this period, six stages of this operation have been carried out and 607 citizens have been returned since 2019: 37 men, 157 women and 413 children including 34 orphans.

Among the returnees, 31 men and 18 women were convicted of participating in ISIS activities.

The final destination of direct flights of Operation “Jozan” from Syria was the Kazakh city of Aktau on the shores of the Caspian Sea. All the women and children were placed in a rehabilitation center, where they were prepared to start a peaceful life in the countryside a month later. After conducting medical examinations, psychologists and religious scholars worked with them. Children attended makeshift schools and kindergartens, where teachers and teachers worked with them.

After the end of the quarantine, all women and children were sent to their relatives in their hometowns.

Now Aseel is happy and lives in her country, and she married another man. She is also happy with the success of her two sons, the eldest of whom is now eight and the youngest five. “But my first husband’s parents still believe that their son will one day return.”

Reasons for offending to extremism

The director of the Aknet rehabilitation center, Alim Shonetev, spoke in an interview with the UN about the reasons for the mass migration of young Kazakhs to Syria in 2013-2014.

He pointed out that one of the reasons is what he described as religious illiteracy, which he says makes young people defenseless against advocates of extremist religious thought.

He said, “Our youth had no objection to the very good work of recruiting preachers. Extremist religious thought is a joint work of political technologists, psychologists and religious scholars who planted it in the minds of young people, after which they were willing to sacrifice their lives for the ideas of others.” 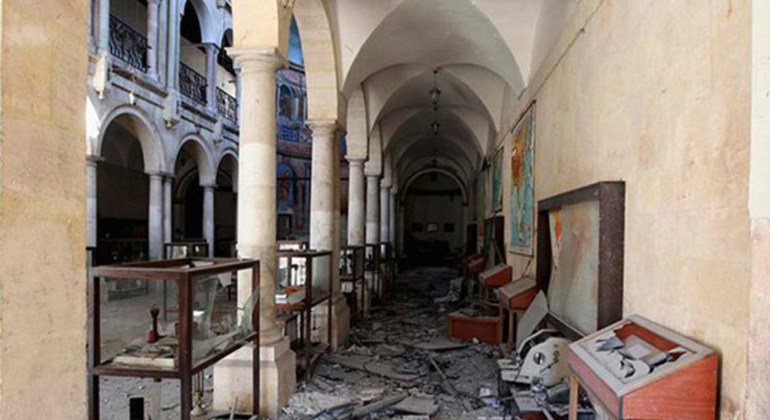 This museum was badly damaged in Aleppo., by Photo: UNESCO/Prof. Abdul Karim

Secondly, according to Mr. Shunetev, in the first years of Kazakhstan’s independence, a law on freedom of religion and religious associations was adopted. “Borders were opened and young people went abroad to religious institutions and fell prey to false preachers. And when they returned to their home countries, they were already spreading a dangerous ideology here,” did he declare.

The third reason is the culmination of the 21st century: the Internet.

He said that young people on the Internet were looking for answers to their questions and solutions to their problems that they had to face in life, and through religious sites and social networks, a process of “self-radicalization” s is produced.

He added: “There was a mass exodus of our young people to Syria and Iraq, so they ended up in someone else’s war. Of those serving their sentences in correctional institutions, 95% of them have abandoned extremist ideology, some have returned to a secular life, and others have converted to moderate Islam. Our work continues.

The return of citizens who have voluntarily traveled to conflict zones to join extremists and terrorists is a very complex process, during which the authorities of all interested countries, with the support of the United Nations, seek a “golden path to strike that balance between public safety, human rights and just human mercy.

The UN provides comprehensive support to countries that have become leaders in this “minefield”. The United Nations Regional Center for Preventive Diplomacy in Central Asia has developed a global program to verify the identity of suspected foreign mercenaries, those returning and those preparing to return, prosecute them if found guilty, rehabilitate them and integrate them into society.

UN agencies, including the Counter-Terrorism Office, also provide direct support to Kazakh prisons in the treatment of extremist prisoners.