Since the movement of free poetry, the Syrian poem has been very present on the Arab poetic scene. Without forgetting the writers of tales, novels and reviews. However, the war in Syria has darkened the current literary scene, which prompted the Cairo magazine “Mirit Cultural”, in its latest issue, to present it through a dossier containing poems by twenty-two poets and nine collections of news. This numerical disparity between poetry and history reflects the former’s rapid response to the current tense moment, which has clear effects on the objective themes addressed in the poems. It should be noted that the issue of war cast a shadow over everything. Here is the poetess Ahlam Othman describing her lover that his eyes are “rolled” with sadness, and that the wind around them was whistling and the rain was falling on their shoulders; “Fled from the smoke of the countryside”, while his hands were cold and his owner trembled, and his hesitant hand remained “a torn prey between the jaws of the night”.

Impact of war and corona

Ahmed Iskandar Suleiman introduces himself in direct descriptive language when he says: “I was born in 1955/ When Syria was a place where the elect were born/ I was born in Gabala/ whose name means the Voice of God in the ancient Phoenician language.” And so on, until he reached the vows of war predicted by the poems: “I lived in Damascus / I felt the war creeping in and approaching / But no one listened to the sound of the poems until “everything that could be caught / The dream turned into a nightmare.” In the midst of it all, a person feels his insignificance and insignificance. a poem by Basma Sheikho when she says, “A useless woman / An addition to the margins of the universe / If she leaves, nothing will change” and feels that she “will be next to her loved ones”. dirt / as in his life. And the situation worsens when the concerns of war are added to the spread of the Corona epidemic, as Bahij Warda says: “Despite the vast space offered by poetry, yet after eight o’clock – time for Corona Virus precautionary curfew – you feel envious, of the freedom to roam that has been granted – in Can ada – Dog owners can go out with their dogs during the curfew period, as long as the distance is not more than one kilometer from the home address. These anomalies have become regular because of their daily recurrence.

Hassan Shahout says, “It’s no wonder I can’t break your silence hanging from the ceiling like a noose of remorse / No wonder I can’t get rid of my tribal fears / No wonder I walk with mud and rain / On my face the tears of the peaks and the sighs of the paths accumulate.” Hussein Al-Daher adds another restriction, namely identity papers and seals to prove his identity: “Excuse me, I can’t get any closer / My feet are bound with millions of papers of identity and seals / War is a single death / Peace is a death thirty times before death.” It is because this temporary peace or truce awaits war and destruction. The poets escape it only by leaving the earth, be it by imagination. Hikmat Al Jassim says, “Come and give yourself a hug / There’s a big sky outside / Waiting for us to fly together / And perish together.

emptiness of the world

Love is therefore an alternative to the emptiness of the world. According to Rana Safkouni, “The man who loved me / bought me an apple / said it was a moon / I believed him / then we devoured the light together.” But this love often frustrates, as Rita Al-Hakim says: “The woman who bites her past / Until it bleeds and her sorrows spill over her shirt / Barren buries her belly in the sand / And makes the love with its dreams / To give birth to unknown lusts. But elsewhere, she links the liberation of women to the liberation of the fatherland: “Freedom is a breakthrough in the time of slavery. Freedom – or always striving for it – is what makes death delicious, and this is what Saddam al-Abdullah depicts, “O death, exalted be glorious / like a cotton candy seller / meaning a colorful laugh with two balls.” He wants death to drop its horrible image when it comes in the form of barrels that would cause thousands of casualties. Aref Hamza stops in front of the sea as a symbol of the labyrinth, he is no longer that lover who kisses strangers: “The sea does not kiss you / The sea does not find the occasion to see you / To wash you with so much violence / You eat the sea / Even if you drown now. Aisha Breikat compares her condition to that of her owner when she says: “When my face rustles / Your shadow breaks on mirrors that breathe the intoxication of my calls / On the edges of a painting filled with water.” Ubadah Uthman anticipates the future of his homeland when he says: “Someday the garden will sleep in its frost / dreaming of swarms of butterflies / and perhaps only wake up after winter has devoured its face / one day the city will walk over our corpses / plowed by the horses of the killers.” 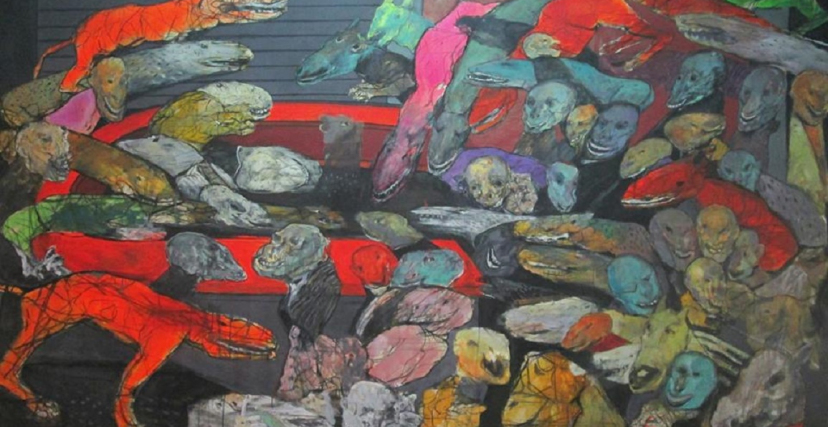 The image of the city also appears in the poem by Abdullah Al-Hariri: “The city wakes up again / As if it had not aged / The buses have Alzheimer’s disease / Forget the faces and remember you facades”. It is remarkable that there is a well-formed vertical poem by Farid Yaghi in which he says: “I kissed your shadow like a child-deprived / Till I melted and lost my hand in the embrace. ” This parallels the prose poem when we read Abeer Suleiman’s saying, “It’s good that I’m the book you tore in the crowd of your concerns / And left it orphaned on the table without features.” Muhammad Al-Habouri presents what looks like an interior monologue when he introduces the sentence and then comments on it: “How close you are to me despite this distance / A lie – I feel like I will see you today / A lie – I’ll see you waiting for you when you pray / A lie.” Hani Nadim talks about the brunette beauty to whom “the soldier returned with the identity of her deceased husband on his forehead”, then continues on the desire to emigrate: “He said to his friend: We don’t need nothing to get out of this hell/a passport and a hidden road that connects us to Malo.” Nadine is especially moved by referring to the marginalized of the city when she says: “At my party I will let my conscience / die for a moment / and I will ignore the young woman who stands in front of the pizzeria / holds a small plate / asks for money to feed her children.”

My loyalty at night is due to portraying his lack of status and value to his father: “Here I’m just like you, my father / but with no role, status or value / and I’ve never been me / as you have been all along. ” In the end, there are two poems based on the description of the first heritage character, titled “From the Papers of the Prophet Yusuf” by Youssef Al-Abbas, in which he says: “Seven will eat what your sufficiencies contain / from seven leaves while waiting The second, entitled “Sisyphus”, by Muhammad Hajjaj Bakri, connects him to the Syrian when he says: “The Syrian Sisyphus is born and grows / gathers homelands at the beginning of tragedies / then proceeds in a mirage / We Sisyphus are children of ruin / We are marked by delayed death / in copper bullets.

In the file, there is a story by Islam Abu Shakir called “Optical Illusion” which relies on the increasing time structure in its description of a woman getting ready to leave in the morning, and suddenly a bullet enters her window. in the midst of his ordinary life. Hassan Al-Judi presents in “Bay Al-Maqdis” the pursuit of a wandering deer by a hunter, where “the hunter follows a thread of broken blood. He shot an arrow at the deer and thought he had hit it” . Raafat Hikmat presents in “The Blood Sealant” a photo of the tailor of the shrouds indicating the large number of dead, and the description of the place is combined with this general meaning: “The door was ajar, rusty, iron, coming to your hearing then that you approach more than a sound from inside – I mean a group of voices – you can if you concentrate on each one of them. To distinguish the sound of a sewing machine. Suzan Al-Saabi describes the situation of a miserable family next to her on a bus. Adnan Kazara portrays the lack of the father and his constant need for him in “The Searcher for His Father”. As for Ghufran Tahan, he deals with the attack of amnesia when he says: “I realized a long time ago that my superior memory could no longer accommodate my details and that it betrayed me, which made me obsessed by tattoos. Lamis Zain imagined a strange case, which is the presence of a person in a half mask who gave birth to a tribe of sons and grandchildren, who all wear a mask on the left half of the face. Nour Al-Mawsili imagines the state of people when she asks: “Does anyone have the price of their daily food these days to buy a painting that adorns the walls of their house?” Wael Al-Qadri depicts a marginalized person who picks up cigarette butts from the ground with his broom, opens the wooden crate and puts what he picked up inside.

The overview of the above confirms the diversity of poetic styles between the pragmatic and the figurative, the use of vertical, operative and prosaic forms, the frequency of themes of war, and a sense of nihilism, fear and of marginalization, which is also found in the short story to a large extent.